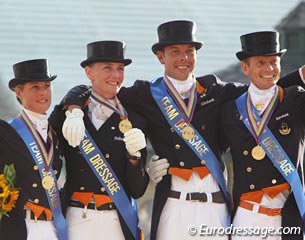 Totilas' first time on American soil has not gone by unnoticed. The black pearl of the Dutch warmblood stud hypnotized the American crowds in the Grand Prix team competition today at the 2010 World Equestrian Games in Lexington, KY, securing a historic team gold medal for the Netherlands.

Edward Gal and Totilas captured the golden victory with a 84.043% earning test, but surprisingly the pair felt a true challenger breathing down their neck: Laura Bechtolsheimer's Mistral Hojris. The British duo achieved unprecedented heights and grabbed the team silver medal for Great Britain ahead of a consistently performing bronze medal winning German team. 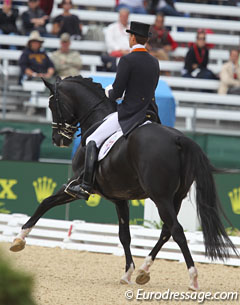 When Gal and Totilas entered the ring, the crowds cheered and clapped as if they had already won. The Dutch duo only competes for the big time and was ready to do some business in Lexington. The halt was perfectly square though the stallion became deep. The trot extensions were decent in overtrack but a bit extravagant in the front leg. The half passes were phenomenal. The first passage was superb, the first piaffe was elevated but could have been slightly more even in rhythm. The extended walk had two hooves overstep. Totilas appeared slightly tense as he tossed his head in the walk and has some difficulties with the onset and exit to and from piaffe. The start of the second passage was slightly uneven in steps, but nevertheless spectacular. Gal did his best to manage smooth transitions and in his effort he produced a delightful second piaffe, but the following passage could have been a bit more forward.

When describing Totilas' performance one simply can only use words like "a bit more, a bit less, slightly" because so many of the movements he does are absolute greatness. Only the tempi changes seem to be a problem for the  stallion. In the two's he lacks straightness, swinging the hindquarters around and in the one's he lacks significant jump from behind and comes tight and behind the vertical. Especially the changes to the left are short. The zig zag went really well and the left pirouette was absolutely brilliant. Gal and Totilas' ride was pretty much spotless and it earned them 84.043 with judge Linda Zang at 82.553 and Stephen Clarke at a very high 87.021%. 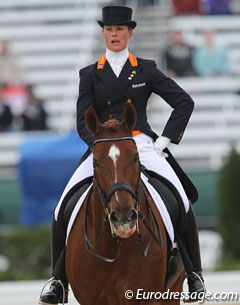 Totilas scored 10% more than the second best performing Dutch rider, Imke Schellekens-Bartels, and the horse carried the Dutch team to historic gold. However the elimination of Adelinde Cornelissen and Parzival due to a bleeding tongue dampened the spirits in Camp Holland. "It was a difficult day for us. Adelinde is not here and she is sad. Even though  we are happy we all had to cry, so I have mixed feelings," Gal confessed at the press conference.

"It was possibly the worst moment of my career and for Adelinde's as well," said judge at C, Stephen Clarke, who had to ring the bell to eliminate the Dutch rider. "I thought I was having a second heart attack," he quipped. "There was no chance, no question. The blood was obvious and visible."

Totilas' supremacy left no doubt, but the competition came to a climax when British Laura Bechtolsheimer put in the ride of a lifetime aboard her 15-year old Danish warmblood Mistral Hojris and scored 82.511%. Her performance was absolutely stellar and with a bit more generosity in points for Mistral's piaffe and passage, which undoubtedly equals if not exceeds Totilas' 10-scoring pi-pa, the combination could be Totilas' future  rival. 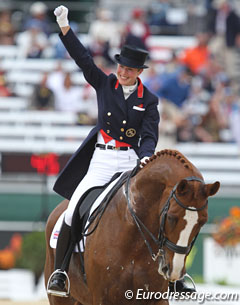 Bechtolsheimer had her act completely together. The trot extensions were powerful, the walk extension was relaxed with much overstep. The two tempi's were huge with much ground cover, the pirouette right was good for a 10. The zig zag could have been a bit more uphill. The first piaffe and passage was regular like clockwork but "only" earned them 8s. For the second pi-pa series the points slowly started to rise and for the final on the centerline, the judges threw in a few tens. Mistral's rhythm and regularity in the piaffe, passage and the transitions are unparalleled. Whereas Totilas stays more uphill in the frame, Mistral excels in regularity. If Totilas gets 10s for piaffe and passage across the board, than Mistral should get them too.

"It was my best score and the best ride I ever had," Laura commented afterwards. "He didn't make any mistakes. He was full of energy, relaxed and listened to me. He made my life easy today." 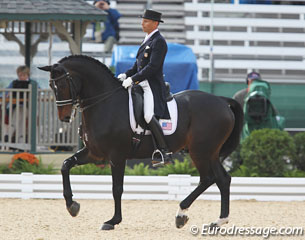 American WEG medal contender Steffen Peters was the last to go on Akiko Yamazaki's Ravel. He had to score 85% to put the U.S.A in silver medal position and 80% for bronze. After his royal victory at the 2009 CDIO Aachen, Ravel has not been out much and it was interesting to see how the 12-year old Dutch gelding had improved. The horse looked amazing. His trot extensions have become more ground covering, his half passes more powerful and his piaffe and passage, including the transitions, were smooth as silk. The horse did break into canter on the center after the entry and halt and Ravel came haunches in at the onset of the second trot extension. The extended walk was good. The straight tempi changes were a highlight in the test, as were the pirouettes which were tiny and well jumped. In the final piaffe at X, Ravel slightly moved toward the right, but that did not reduce the ride from being less than fantastic. The pair scored 78.596% to finish third. Team U.S.A ranked fourth. 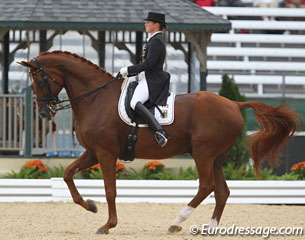 German anchor Isabell Werth and her second Grand Prix horse Warum Nicht FRH finished fourth with 75.404%. Werth is value for money on a team and at WEG she reconfirmed her position as best performing German at an international championship. Aboard her massive chestnut gelding, she achieved a solid round with nice highlights in the trot, but a few imperfections in the piaffe, collected walk and canter. Each time in  piaffe "Hannes" lost the forward tendency and threathened to take a step backwards. The passage was well suspended. The extended walk had major overtrack but in the collected the horse lost clarity of rhythm. In canter he executed lovely pirouettes but at the beginning of the canter work he got tight in the neck and behind the vertical, especially in the two tempi's.

Isabell Werth resigned in the fact that Germany won team bronze. "Laura did a great job so we didn't get the silver what we thought," she said. "They were just better. We need to work to come closer and to come back at the middle of the table (where the gold medallists are seated)." 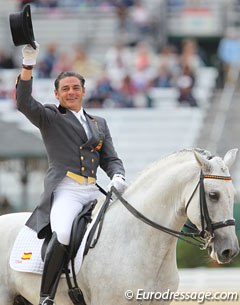 Another rider went beyond all expected limits and made an impressive power statement at the World Equestrian Games. Spanish Juan Manuel Munoz Diaz and his grey Andalusian (PRE) bred stallion Fuego XII finished at an incredible fifth place with 73.957%. A fellow competitor joked that if the horse was painted black, he would get the same scores as Totilas. This grey stallion moves like a gifted warmblood horse and has ground covering trot extensions. His piaffe is textbook with the hind legs taking the weight while bouncing with spring off the ground. The one tempi's were large and uphill. Munoz Diaz' performance was so unique that the judges lost their groove and got stuck on different wavelengths. The judge at  H scored the ride 69.787 while the judge at M scored it 77.447%. The other three were rock solid at a high 73-low 74 percent.

“The level was fantastic. All riders took high risk which makes it exciting for the public and for us," said Stephan Clarke. "It was nail biting. There are several combinations that can fight for top places."

Having judges 55 combinations in the WEG Grand Prix test, several significant disparities amongst the judges were to be seen, even though the overall ranking of the riders was on the money. "Over two days there were quite a few differences of opinion,"  Clarke admitted. "We'll go from this meeting and spend another few hours going over videos and the sheets. We don't try to hide from that. We look at those differences and find out what happened. We have to try to draw a clearer conclusion. We work hard to try to do this and we need to thrash those differences out."