Photo Report: Champions and Stars of the 2010 Bundeschampionate 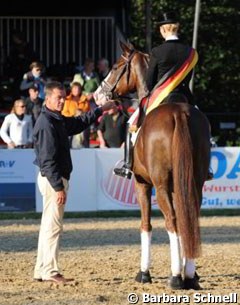 Eurodressage correspondent Barbara Schnell attended the 2010 Bundeschampionate and made this lovely collection of photos which give a good impression of the atmosphere in Warendorf and the high quality of horses being competed there. The big winners of the show were 6-year old Westfalian Blickpunkt and 5-year old Lissaro van de Helle.

Eva Möller rode Silvia Rizzo's Blickpunkt (by Belissimo M x Weltmeyer) to his second consecutive Bundeschampion's title. He scored a 10 for his trot work and a 9.0 for walk and general impression. With a total of 9.0 Blickpunkt topped the leader board.

The 5-year old Belgian owned Lissaro van de Helle wrote history in Warendorf winning a third consecutive Bundeschampion's title in the 5-year old Dressage Horse Division. Under Claudia Ruscher, the bay Hanoverian (by Lissabon x Matcho AA) was also the 3 and 4-year old Champion. Only a pony, Dornik B, was able to match that unique and historic achievement. 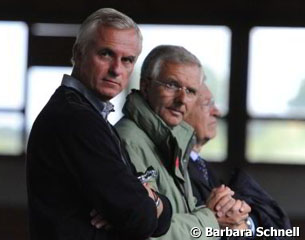 Barbara Schnell also reported that there was a (non-public) judges' clinic during the BuCha, at which Christoph Hess discussed with the participants if a BuCha qualifier should be judged differently than a normal riding horse test. "It was VERY interesting to hear the variety of opinions," Schnell told Eurodressage. "The opinions ranged from those in favour of judging 'potential' over the actual test to those who said to always judge what they see."

Christoph Hess asked Wolfram Wittig for his opinion as a trainer and a breeder and Wittig took the side of judging what you see. "It is a slap in the face of every conscientious trainer if a flashy horse with an inaccurate test gets higher marks than a solidly ridden, solid horse," Wittig said with determination.