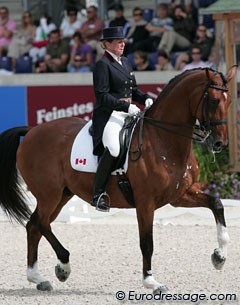 Dressage Canada announced the combinations that have been named to the Canadian Dressage Team for the 2010 World Equestrian Games in Lexington, KY, September 27 - October 1, 2010.

The Canadian team, trained by American Olympian Robert Dover, was announced on Friday 6 August 2010 but no reserves were listed.

Dover stated that, "Equine Canada will be naming its reserves on Monday and all 6 combinations will have their final training camp starting September 15th at the farm of Kathy Priest, near the Kentucky Horse Park.

I congratulate all the riders as well as their horse owners and supporters and look forward to a very successful WEG!"