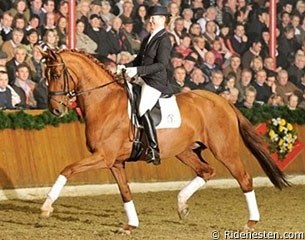 The Danish equestrian website Ridehesten.com reported that the Oldenburg mare champion Rebelle has received a wild card for participation at the 2010 World Championships for Young Dressage Horses starting in two days in Verden, Germany.

The 6-year old Rebelle is owned by Blue Hors Stud and will be ridden by in-house rider Maria Anita Andersen. The pair got a wild card to represent the German breed in Verden.

In 2007 Rebelle (by Don Schufro x Regazzoni) became the Champion of the Oldenburg Elite Mare show in Rastede. In 2009 she competed in the Danish Young Horse Championship finals for 5-year olds.