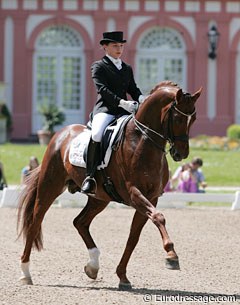 It has been an exhausting but exhilarating three-day marathon photographing two days in a row at the CDIO-PJYR Moorsele followed by a one day stint at the CDI Wiesbaden. After three days of driving from the most Western point of Belgium to a quite central point in Germany, I added another 1000 kilometer to the mile-o-meter of my car.

I just bought a new lens (300mm/2.8) for my camera and I had to put it to good use in Wiesbaden, one of the most picturesque locations for a horse show world wide. Especially with spring weather at its best (a sunny 24° degrees and a mild breeze), the Biebrich Castle Park couldn't have been any prettier. Even the trip to Wiesbaden on the German Autobahn (along the A3) seemed more of a scenic drive than the usual frantic race to one's destination on a motor way filled with road devils and typical constructions sites preventing a smooth passage.

I arrived at the castle park and had to traverse a massive trade fair with a horde of people before reaching the dressage arena. Round the warm up ring, people were sitting on the lawn having a pic nic. The whole atmosphere felt incredibly British: plaids on the grass, hampers filled with goodies, people nibbling food while watching dressage, and dogs all over the place!

The Friday program in Wiesbaden was not so busy. It started with the Junior Riders' team test, which counted as a German qualifier for the 2010 European Junior Riders Championships, and then the Grand Prix for Kur. Two and a half hour drive to photograph only twenty-two riders is not very cost-effective management of mine, but we all know that horse fans are driven by the heart and not the mind!

The junior riders' team test was won by Charlott Maria Schurmann on her 17-year old Hanoverian stallion World of Dreams (by World Cup I x Cardinal xx). She was the first rider to go and immediately spearheaded the pack with her 71.514% score. Jill de Ridder and her Carabas offspring Charmeur placed second. 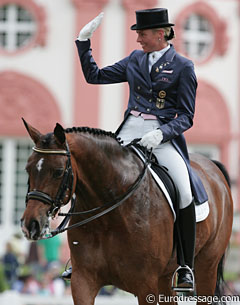 "Charlott-Maria is very ambitious and can concentrate to the fullest," said her trainer Olivier Oelrich. "The atmosphere in Wiesbaden was very impressive, but when it comes to doing the job she gets a tunnel focus in the positive way."

The Grand Prix was won by local favourite Anja Plönzke on the 11-year old Hanoverian Le Mont d'Or (by Landjuwel Gold x Wie Weltmeyer) with 68.766%. Plonzke rode strong trot half passes but her horse rushed in the second trot extension. In the one tempi's the horse lacked straightness and the rider was vehemently swinging in the saddle which meddled with the otherwise harmonious silhouette. The transitions to and from piaffe and passage were lovely and the zig zag was very well controlled.

"Le Mont d'Or is totally uncomplicated," said the 41-year old Plönzke. "Our communication is almost like between humans. I often have the feeling that he really understands what I say."

Hans Peter Minderhoud and his young Grand Prix horse, the 10-year old KWPN stallion Tango (by Jazz x Contango), placed second with 68.553%. The liver chestnut stallion was quite impressed by the arena and  score board and put the brake on in the trot extensions heading towards the short side at C. Tango has a fantastic passage but in piaffe he lacked some impulsion.

"It's a pity we had a few mistakes. There is a lot going on round the arena," Minderhoud explained. "There is a beautiful fountain continuously spouting and that was very exciting for Tango." 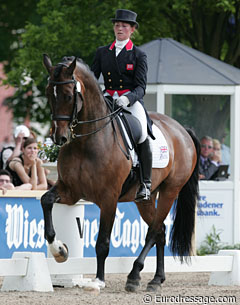 British Maria Eilberg and her 16-year old Westfalian gelding Two Sox (by Ehrentusch x Fruhlingsrausch) were on form finishing third with 68.085%. The combination put down a powerful, faultfree ride which put them in the lead for a long time. In the piaffe, Two Sox nicely takes the weight on the hind quarters but travelled a little bit too much forward. The combination executed the best rein back of all participants.

After the class, I wondered around the premises a little more and watched some young riders school their horses.  The drive home (strangely my GPS guided me via the A61 this time) was equally as beautiful. It took me on a winding motorway through a mountainous area in between the rivers Moselle and Rhine. It was breath taking. What a glorious day!

Astrid Appels was on the scene taking photos of all junior riders and Grand Prix for Kur riders. If you are interested in ordering prints, please email us with your name and the horse's name you want to see the contact sheets of to order photos.