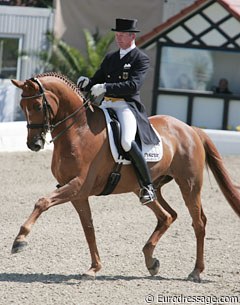 Hubertus Schmidt and the 11-year old Trakehner gelding Hinnerk TSF won the Grand Prix for Kur at the 2010 CDI Hagen on Friday 23 April 2010.

The Buddenbrock x Ravel offspring, owned by German chef d'equipe Holger Schmezer, made no big mistakes and his friendly appearance under Schmidt made the pair score 71.659% to place first in a field of 29 competitors.

The sympathetic Hinnerk improve in his test. He started out with super trot half passes but with the head slightly bopping and the mouth opening up especially in the passage. He struggled a bit to find the right rhythm in piaffe and lacks lift in the front leg, but he showed lovely elevated passage. The second piaffe-passage tour was much better and the canter work extremely solid with excellent two tempi changes. The general impression was extremely friendly and overall the horse exuded confidence.

Polish Katarzyna Milczarek is on a rise with her 10-year old Polish bred Ekwador (by Heraldik xx x Corofino). They were already showing excellence at the 2010 World Cup Finals in March and now at the CDI Hagen, the first outdoor CDI of the 2010 season, their gradual improvement didn't stop. The chunky grey stallion with a big stocky neck has incredible bounce in the trot extensions. In the piaffe he still tends to travel forwards but the passage is regular and buoyant. In the zig zag the horse slightly lost some balance and activity from behind. The two tempi's were a highlight of their test: uphill, ground covering, straight. The combination scored 70.127% and placed second. 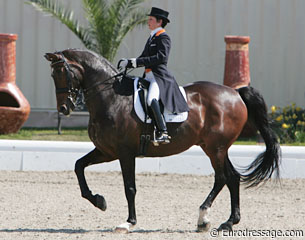 Dutch Jeannette Haazen presented an excellent Nartan who showed himself so much better than at the CDI-W 's Hertogenbosch a few weeks ago. Finally the huge bay KWPN gelding (by Jazz x Le Faquin xx) was not so tight in the neck and it made his whole silhouette much more appealing. The trot half passes were very fluent. In the first piaffe he lost impulsion but Haazen insisted on fulfilling the required steps and corrected the situation. The collected was superb in clarity of rhythm. The second piaffe and passage was regular but could had more engagement from behind. The Belgian based Haazen put in solid work in the canter with only the zig zag lacking refinement. They scored 69.617% to finished third.

Nadine Capellmann and Elvis VA are back in the show ring after a long competition break. The 14-year old Hanoverian gelding by Espri x Garibaldi II is wearing new attire: a new type of bridle which decreases the pressure on the poll. 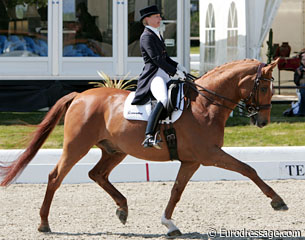 Trained by Klaus Balkenhol, Capellmann started her ride with an excellent trot extension. The passage is less awe-inspiring than it was four years ago but the regularity is still there. In the first piaffe the chubby looking Elvis had a slight loss of rhythm and there was a break into canter in the second piaffe-passage tour. In canter the gelding moaned in the execution of every movement. The tempi changes were clear but the pirouettes were a bit sloppy. Capellmann ended her ride with an extended trot for a 10 and a decent final centerline. The judges rewarded the ride with 69.489%

Anja Plonzke and Le Mont d'Or (by Landjuwel Gold x Wie Weltmeyer) slotted in fifth with 69.191%. The bay Oldenburg gelding has a lovely passage but struggled with finding the balance in all three piaffes. The two tempi's were far better than the ones in which the rider was swinging her legs vehemently to give aids. The trot half passes were nice as well as the trot and canter extensions.

Lots of energy in Victoria Max-Theurer's ride with the Westfalian stallion Eichendorff (by Ehrentusch x Ferragamo). The trot tour was super expressive with much engagement from behind, nicely uphill in the frame. The forwardness in trot (the collected trot sometimes looked like a medium trot) was also visible in passage, in which the pair lacked collection. In piaffe the charming bay gets wide in front and could push himself more off the ground. The extended canter was great as well as the two tempi's and pirouette left. 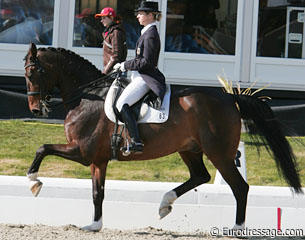 An absolute star pair for the future are Susanne Lebek and the 12-year old Hanoverian gelding Baudolino (by Convoi x Dux). The bay, who carries his tail far out, has hind legs that are always active, stepping under. He has a breath taking piaffe and passage with superb left and buoyancy. The rhythm in piaffe is excellent but the regularity in passage is not yet ok. The horse always stayed nicely at the vertical except in the final extended trot in which he got deep. The collected walk was mediocre in quality but the canter work was high quality. This is a very promising pair that can certainly score over 70% in the future. For their Grand Prix they got 68.595%

After a five month break due to personal heath issues, Anabel Balkenhol came back to the show ring with Rubins Royal (by Rubinstein x Vargas xx) to finish 9th with 67.702%. The score was quite conservative for the quality work the pair produced. The piaffe and passage were extremely regular though the piaffe could have had more sit. The trot extensions were lovely. The 'issue' of the ride was the bay becoming deep especially in the canter work. The gelding lost his uphill tendency despite showing nice tempi changes and a well regulated zig zag.