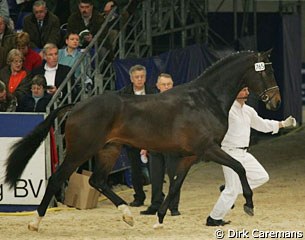 The 2004 Oldenburg Licensing Champion Van the Man (by Furst Heinrich x Volturno) has been humanely put down due to an irrecoverable injury.

The dark bay gelding fractured his navicular bone and veterinarians could not cure this. It was therefore decided to euthanize him.

Bred by Arend and Doris Boekhoff, Van The Man was the eye catching "Siegerhengst" at the 2004 Oldenburg licensing and at the time surprisingly sold to the show jumping stable Eurocommerce. Little was known then that Ger Visser's brother Kees had also taken an interest in dressage horses through his wife Tosca. The Visser couple also own Edward Gal's European Champion Totilas.

Van The Man briefly stood up for stud in Germany but hardly any publicity appeared about him and the colt soon disappeared from the scene. Van The Man tried to get licensed with the KWPN in The Netherlands in 2005 but was rejected based on his character. Afterwards the stallion was gelded and focused on dressage training.

“Van the Man stood at our home and I was preparing him for a competition career," Tosca Visser stated. "It is very sad this has happened. He came totally lame out of his stall and we immediately took him to the clinic, where they diagnosed the broken navicular bine. The only solution was to put him down."