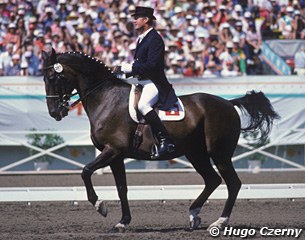 Today the Dutch warmblood breed is one of the most successful for dressage horses. For many years horses from the Netherlands have been winning all over the world and even break records like Totilas recently.

Although the Dutch produced good horses already in the 1970s, they had to wait quite long for one of their horses to become an individual medal winner.

Their first medal winning horse was not a textbook dressage horse, being a rather heavy bodied one with quite an inexperienced amateur rider on his back. His story is the proof how the character makes a horse and can compensate the odds easily.

Limandus, a dark bay gelding with three white socks, was sired by Markies and was born in Holland in March 1970. He was bought by the well known Dutch dressage rider Jo Rutten, who trained Limandus to Grand Prix level. The willing horse must have been a quick, eager learner, because he appeared on the international scene for the first time as a 7 year old at the 1977 European Championships in St. Gall. At the young age of 8 he was nominated for the Dutch team to start at the 1978 World Championships in Goodwood.

Though the Dutch finished in last position, Limandus defied his inexperience to place a very good 13th nearly reaching the individual final. Of course a horse of Limandus' ability caught the interest of experts and potential buyers. At Goodwood insiders like famous trainer Georg Wahl heard the Dutch horse was offered for sale. Wahl immediately considered Limandus the ideal horse for one of his pupils, who was looking for a Grand Prix horse.

Otto Hofer, a then 34 years old Swiss businessman, had always liked horses, even as a small boy. In the 1970s he bought himself his own stable at Grabs in Switzerland, where he spent his spare time away from his firm. Hofer had trained a gelding to S-level with the help of Georg Wahl, but needed a more proper replacement. So only a week after Wahl returned home from Goodwood he and Hofer set off to Holland to have a look at Limandus and try him.

The ride was a complete success as Limandus performed the whole Grand Prix program very willingly. Hofer immediately bought the gelding by handshake from Rutten and recalls what happened then: “Jo Rutten untacked Limandus, put him in a head collar and put him in a field with about 30 cows. Limandus whinnied and the cows mooed and I was convinced that my new horse would cope with every situation in his life."

In the autumn of 1978 Limandus left his lowland home country and moved to hilly Switzerland. At the beginning his job wasn't to travel to shows or to continue his international career. He served as schoolmaster for his new owner, who had never ridden at that level before and still had to learn a lot under the strict supervision of Georg Wahl.
But as Hofer admits:, “Limandus first had to be my schoolmaster. I tried hard not to trouble the sensitive horse with inaccurate commands in order to win him over as my partner.” 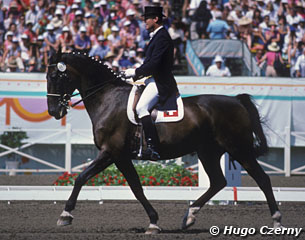 Limandus showed what an extraordinary and great character he was by forgiving little mistakes and enjoying every praise from his rider. Only half a year after acquiring the dark bay the Grand Prix newcomer and amateur Otto Hofer were able to start at the renowned Dortmund indoor show at Grand Prix level.

But it took three more years to mature and then Hofer was able to be really competitive at the highest level. He won his first Swiss Championships in 1982. A year after he joined the Swiss national team for the first time, they took home a team bronze medal from the 1983 European championships in Aachen. It was the "re-start" of the  horse's championship career, which would led to even greater success later.

Limandus was a very easy horse to handle, very relaxed and self-confident and totally uncomplicated to train and look after. He loved to travel and entered every trailer or truck without any assistance. This worked in his favour when he he flew to the 1984 Olympic Games in Los Angeles and didn't mind standing long hours on a plane and facing the Californian heat.

He was in excellent form and the best scoring Swiss horse in the Grand Prix, which he finished in 3rd position, a bit to everyone's surprise, just ahead of his team mate Christine Stückelberger. Quite a while it looked like a sensation could materialize when the Swiss team led the competition, but Ahlerich reduced the virtual gold to silver. 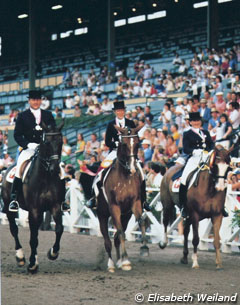 Limandus' strength was his classical sitting piaffe and especially his powerful passage, which probably was the best of his time. In the Special he seemed to fight every step for his rider and performed faultlessly to win the individual bronze medal. Limandus realized the hopes he had initially shown six years earlier with Jo Rutten. In Los Angeles the sympathetic friendly looking Dutch gelding made his rider the most successful Swiss athlete and one of a few amateurs at the Games.

A year later the European championships in Copenhagen were the main aim and despite a disappointing result in the team competition, in which Switzerland was out of the medals, Limandus shone true to the word. He was a horse always content with himself, his rider and his life, which he reflected in his work. The description of a “happy athlete” fitted the patient gelding perfectly. In Denmark Limandus was able to improve his Olympic performance to become the reserve European champion, the greatest success of his career.

While other valuable horses were packed in the proverbial "bubble wrap" to prevent them from the slightest injury, Limandus was lucky his rider paid him something back. He was turned out into a field daily. He knew it from Holland and as he was such a relaxed, well-tempered horse it was no problem at all. Otto Hofer and Limandus' longtime groom Doris Korrodi did not need to lead him to the fields as Limandus faithfully followed them like a dog, without a lead rope.

Of course Limandus was one of the favourites for the 1986 World Championships, but unfortunately the gelding sustained an injury ar the CDI Lausanne, which was a qualification show for Swiss riders. On slippery grass surface in the warm up ring Limandus slipped and strained his foreleg. Hofer’s vet recommended to give the horse enough time to recover so Hofer decided not to start in Canada and gave Limandus a comfortable rest.

In 1987 Limandus had been nearly a decade in the top sport, but although he had started at Grand Prix level early his health was exceptional, certainly due to the fact he wasn't started too often and had had skillful training all his life. As a successful businessman Otto Hofer did not have as much time to compete as other top riders and he treated his horse more like a beloved pet than a sport machine.

Limandus returned to Goodwood for the 1987 European Championships, where he had started his international career nine years earlier. The faithful Dutch horse hadn't lost any brilliance and finished the Grand Prix exactly on the same score as Ann Kathrin Linsenhoff's Courage, which followed in Limandus' footsteps to become European reserve champion the next day. The remarkably strong Swiss team lost the gold medal by only three points to Germany. Individually Limandus finished just out of the medals in 4th place and had proved his fitness and well-being as a senior competitor.

During the 1988 Olympic year Limandus stepped aside for his successor which had taken over from him in an impressive way: the Danish gelding Andiamo, an exceptional dressage talent by May Sherif, came third in the World Cup Final and as the younger horse he was Hofer's first choice for the expected climate in Seoul.

Limandus, who was a very laid back character and just the opposite of the highly excitable Andiamo, flew to Seoul as reserve horse. Aged 18 he came to South Korea in top shape and who knows he could have been the better choice in the very noisy stadium, which didn't suit Andiamo very well.

After Seoul and more than ten years on the international scene Limandus was not immediately retired to the field. He was carefully ridden by a pupil of Otto Hofer, before finally retiring at the age of 20 in 1990. Unlike other retired horses he was still very healthy and able to enjoy his retirement for over 12 years.

Doris Korrodi, who still leads Otto Hofer's stable, took care of Limandus through all the years until his very last day. She fed him special hard feed in his last years and made the old lord comfortable. In his 30th year Limandus' typical signs of old age became worse and together with his vet Hofer decided to humanely put him down. So in September 2000 the greatest horse Otto Hofer ever had was euthanized under a maple tree in his field.

Limandus' successes will always be remembered, but much more for the way he reached them: The happiness and contentment this horse showed his entire life, performing in the most beautiful equestrian disciplines, made him a true happy athlete.