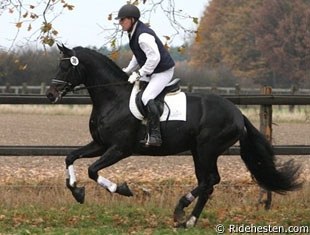 On the final on Friday 13th November 2009, Furstenball proved his dominance not only as a dressage stallion but also as a very able cross country horse. With a score of 145,25 points in total, Paul Schockemohle's and Lone Boegh Henriksen's dark bay stallion blew away all competition.

The 3-year old Furstenball is one of the very few stallions in Germany to have scored over 150 points for dressage. The Furst Heinrich x Donnerhall x Classiker offspring was rewarded 154,99 points, scoring straight 9s and 10s for his basic gaits and rideability. For show jumping he performed well and got 113,81 points.

The second highest scoring horse in Schlieckau was the 3-year old Hanoverian licensing favourite Blue Hors Bentley (by Belissimo M x Weltmeyer offspring). He scored 133,85 points in total. For dressage he got 138,75 points and for show jumping he received 113,12 points. The third highest scoring stallion was the show jumper Cosido (by Cosimo x Calido). He got a total of 126,33 points. 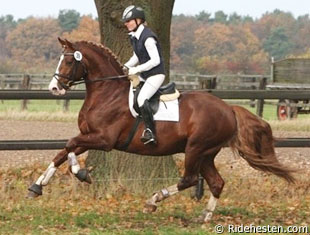 44 stallions in total completed the 70-day testing in Schlieckau. Amongst them was Sissy Max-Theurer's 6-year old Oldenburg licensing champion Kaiser Karl (by Kaiser Franz x Lefevre). The chestnut stallion finished in the top five with a 133,94 point dressage score and a 100,94 point show jumping score. His total was 123,85 points.

The 2007 Hanoverian Licensing Champion Soliman de Hus (by Sandro Hit x Donnerhall) lacked in versatility. The 4-year old stallion was outstanding in dressage (137,24 points) but disappointed tremendously in the cross country which pushed his jumping score down to 80,98 points and his total to 109,21.