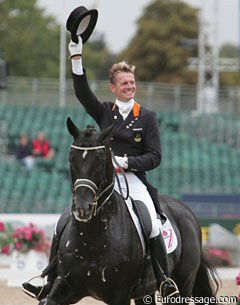 It's been a core shaking day for dressage here at the 2009 European Dressage Championships in Windsor, Great Britain. When a new awe-inspiring horse enters the scene, everybody wants to see it in order to partake in the hype. Many people are sensation seekers in one way or another. You have thrill seekers who like to jump out of airplanes and you have more reasonable people, like dressage lovers who get that goose bump effect when they see a certain horse dance. You had Blue Hors Matine at the 2006 World Equestrian Games, you have Totilas at the 2009 Europeans.

A world record score, Holland blowing away the competition with a 17% point advantage, Britain winning silver... all that in one day. Phew, it is a lot to take in :)

The first day at an international championship is usually a quieter one. The first part of the team competition meant photographing 25 horses and writing one big story. Piece of cake. Yesterday evening us, slave workers (read: the press), were ready on time for once and decided to go for food.

The press centre at the show grounds is big with good accommodation to sit at and a functional wireless connection. But while we are based in the gardens of the Queen of England, we are treated like paupers here. There is only one coffee machine and a big jug you can tap water from. That's it. No cooled drinks, no "good" coffee or tea and absolutely no food whatsoever. The press don't want to be treated like kings, but they are HARD working people doing long hours. People get grumpy when they are hungry and there is hardly any time to queue in a nearby restaurant for food as breaks are used to download photos and write stories. Feed us or we get annoying!! (And take an example from Aachen or Verden, which does take good care of its press workers). 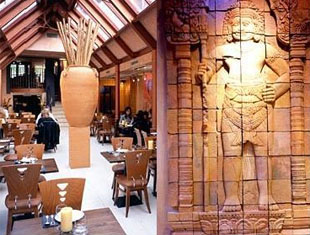 Anyway our taxi driver of the week is my long time Belgian colleague and friend Dirk Caremans of Hippofoto.be/Caremans.be. He drove his big jeep to England on Monday and was kind enough to hauled five more journalists into Windsor town for the night. FEI staffers Malina Gueorguiev and Olivia Robson and journalists Ken Braddick and Claartje van Andel joined us for dinner in Windsor town.

Imagine a car so packed with people that you actually fall out of the car as soon as you open the door. That was us. Windsor is extremely touristy and you have one restaurant next to the other. We decided for Thai food, which is one of my favourite cuisines. We had a lavish "Thai banquet" and the food just kept coming. I got up at 4.40 AM that morning and by the end of dinner I was almost falling asleep at the table (even though the conversations were very interesting, so no offence to my table guests). 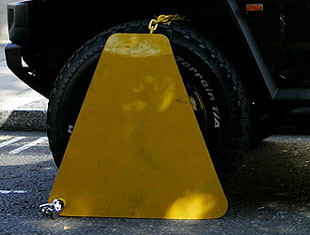 We called it a night round 10.50 PM and headed back to the car. Two people were standing near it and I got the impression they were breaking in. No, wrong. They just clamped the wheel because our parking ticket had expired at 10.25 PM. A big argument arose between the two British parking guards and the six of us: Bulgarian, Australian, American, Dutch and two Belgians. It was quite a situation. The result was that we had to pay an outrageous 120 GBP to get that ugly yellow barnacle off Dirk's car. Rip off number two in two days time!

After dropping off Claartje, Malina and Olivia, the three of us finally made it to our hotel in Slough. It took me exactly three seconds to put my head on the pillow and fall asleep.

It was a 7.30 AM wake up call. We wanted to be back at the show by 8 so we could work a little more, posting photos and stories. The day flew by. During the lunch break and wanted to post an update of the two morning groups but by the time I had written my story (and as you know I can be very long winded) there wasn't a minute left to prepare photos and upload them all... My plan of posting a morning story went straight down the drain (it only got up round 4 PM after the medal ceremony. So if you ever wonder why I am slow in posting stories, it's because there is not enough time!!

I just finished my wrap-up story on the team championship class and got it posted at 10.30 PM. As Dirk is shooting the show jumping (a discipline which interests me as much as darts does), I decided to write my diary blog of the day... So here you go.. Now I'm just waiting for Dirk to appear...

Oh by the way, we just lost all power and there is now a black out in the press centre (and big parts of the show ground!). Talk about a bit of excitement.