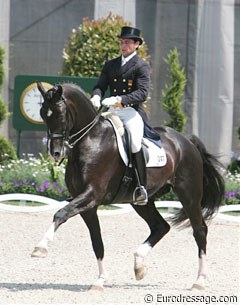 The Spanish Equestrian Federation has announced the team that will represent Spain at the 2009 European Dressage Championships in Windsor, Great Britain, August 24 - 30, 2009. The selection of the team stirred quite some dust as Spanish national champion Rafael Ortiz was not considered for the team after an administrative sanction by the FEI for a positive medication A test at the 2009 CDIO Saumur.

The Spanish Champion, Rafael Ortíz and his Andalusian stallion G-Nidium are not selected due to a positive medication A test for Betampethasone at the CDIO Saumur. "The case fulfilled the requirement for an administrative sanction.  The fine is 1000 Swiss francs plus costs," FEI Dressage Director Trond Asmyr told Eurodressage. "As it is an administrative sanction, no suspension is involved from FEI."

The Spanish Equestrian Federation also carried out an administrative sanction on Ortiz and banned him from team selection, though he can continue to compete internationally. "The said reaction from the Spanish federation is entirely up to them, and not part of the FEI action," Asmyr explained.