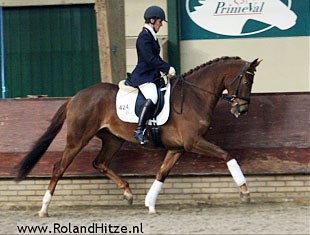 After several selection trials held in 2008, seventy horses qualified for the Finals.

The liver chestnut elite mare Annerijke topped the leader board in the dressage division containing 41 qualified horses and judged by Henk van Bergen and Peter Perlee. The top four ranked horses were test ridden by Perlee. Annerijke placed second initially but after Perlee sat on the mare, she won the class with two points advantage. Annerijke is a mare by Jazz out of star mare Rozarijke (by Gribaldi) and is bred and owned by A. van Essen. Under Judith Ribbels, the mare has been very successful in 2008, achieving the highest IBOP score ever (90 points) in the KWPN mare performance test.

The powerful chestnut Aston Martin NL (by Uphill) under Emmelie Scholtens finished second thanks to good scores for rideability from judge Perlee. Scholtens also ranked third with the mare Aendolyn (by Krack C). Diederik van Silfhout and Angusch (by Special D x Jazz) led after the first round, but finished fourth after the guest judge riders had sat on him.