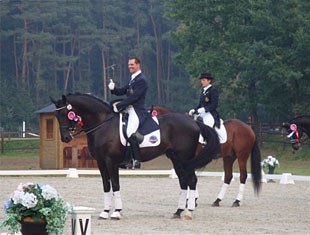 Van Ingelgem scored a total of 215,242%, while Hologne-Joux totalled 204,665% and Devroe 201,408%. Devroe was not able to present his first horse, Paganini as the Rhinelander gelding is still recovering from an injury. Two Friesians landed fourth and fift place. Adel under Peter Spahn was fourth and Rintje V under Hans Meganck finished fifth.

"This is the apex of a successful season," Van Ingelgem said. "Withney gave me a super feeling. He was hot but under control. It was our freshest freestyle of the season. In Aachen, I had scored 73% and now I was hoping for a little bit more. We got 74,75% for the kur and won the Belgian Championships."

Van Ingelgem's black stallion Withney van 't Waaihof recently sold to a Belgian sponsor who initially wanted to stay anonymous. His identity has now been revealed and it concerns Bart van Malderen, son of the founder and ceo of Ontex, one of Belgium's biggest companies which produces hygiene products. Van Malderen's new partner Tereza is a horse fanatic and inspired Van Malderen to invest in an international Grand Prix horse. In the future, Withney will appear on the score sheets under his new show name "Withney van 't Genthof"

Round 3 - Grand Prix Kur to Music