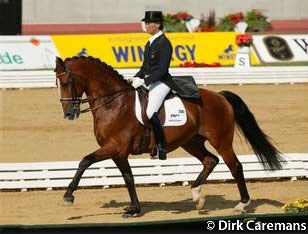 Tineke Bartels' former Grand Prix horse Luxaflex has been put down following a break and run incident at the Bartels' Horse Academy on Wednesday October 3, 2007.

The 17-year old horse was in the field when he startled from a tractor passing by and broke out. He fled in the woods and was caught a few kilometers away from home with a torn tendon in the hind leg. The injury was right on his weak spot, where an old injury used to be. One day later, the Bartels family and his owner Mrs Sonnenberg (founder of Hunter Douglas' Luxaflex window company), decided that it was in the best interest of the horse to put him down.

The 17-year old Dutch bred Luxaflex (Wellington x Rigoletto) came in training with Tineke Bartels 14 years ago. He was bred by Peter Rinkes of the Fortuna Hoeve and sold to Mrs Sonnenberg through Johan Hamminga. He competed all the way up to Grand Prix level and was internationally active at shows between 1997 and 2002. He competed briefly under Imke Schellekens-Bartels in 2004.

Many injuries meddled with a progressive career of this horse. He suffered from frequent colic attacks and was operated on three times. He sustained a severe tendon injury which flared up regularly. Luxaflex was retired a few years ago and spent his retirement at the Academy.

"I was pretty sad last week because I had such a special bond with him. We went through a lot together, but he had such a fantastic character," Tineke Bartels said. "His stall was right behind our kitches and he was one of the first horses that greeted me everyday when I came out."