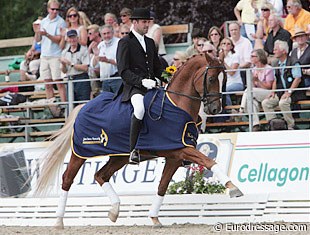 On Saturday morning August 4, 2007, the 6-year old Consolation Finals took place at the 2007 World Championships for Young Dressage Horses in Verden, Germany. The surprise winner of the class was the Hanoverian licensed stallion Alabastro (by Alabaster x Brentano II)

The consolation finals are the ultimate chance for youngsters who made mistakes or who did not show their full potential to show off their class one last time and earn a ticket to the big finals on Sunday. The top three placing horses of the consolation finals automatically qualify for the finals and fill of a field of 15 horses in total that will battle for the title of World Champion. 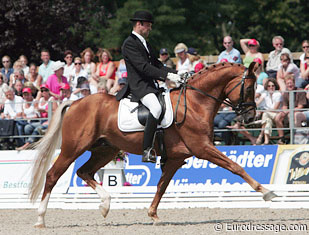 Nick van Laer and Alabastro already proved to be a strong pair in the qualification round in which they probably were a bit underscored. But vengeance was theirs and with a very solid ride, better than in the first round, they scored a total of 8.04 and topped the leader board.

Judge Stephen Clarke praised Alabastro's absolute regularity and good impulsion in the trot with the medium and extended trot as highlights of the test (this horse performed the best trot extensions of all competing horses in the World Championships). The walk was not totally clear on the 1st diagonal but improved on the second. The canter showed much energy and expression. While in the first round, Alabastro was a bit dead in the mouth, his submission in the consolation finals was far better and he moved confidently and powerfully forwards. The horse's scores were 8.7 for trot, 7.0 for walk, 8.4 for canter, 8.0 for submission and 8.1 for general impression. The total of 8.04 placed them at the top! 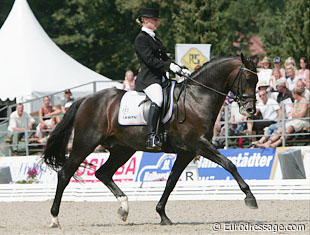 While the judging of the consolation class was good to follow and the audience in general seemed to agree with the verdict of the judges, the second place of Esther Blok and the KWPN branded Ulysse was a bit of a surprise. This reporter would have switched the ranking of secoind placed Ulysse with the fourth place of the KWPN stallion Uphill. The latter was far superior in his presentation and overall quality of basic gaits. However, the judges believed that Ulysse was the second best performing horse in the consolation class. The long legged Jazz x Roulette offspring is an elegant dressage horse who was presented in a very active way and though the judges said that the tempo was regular, it was way too quick and there was much balance loss in the bends. The walk needed more opening in the frame and the canter needed to be more uphill through the shoulder. The judges also thought this horse was clear in his regularity but there was loss of rhythm. The rider tried very hard to present the horse in an active, engaged way but overpushed her horse a bit. Nonetheless, Ulysse is definitely a talented horse and has much potential for the future. The judges scored the trot 8.4, the walk 8.2, the canter 7.9, the submission 7.5 and 8.0 for general impression. 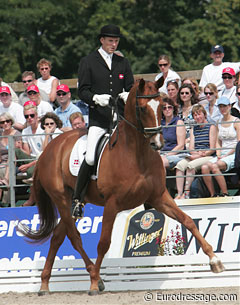 Qualitywise the best horse in the consolation finals was the Danish warmblood gelding Handsome. Bred by Danish Olympian Lars Petersen and his ex-wife Mette, Handsome is by Hertug out of a Schwedengruss dam. The horse is owned by Elin Hove, who got the chestnut as an engagement present from her husband Hans Jul Andersen of Gestut Nexen in Denmark.

Under Holger Sorensen, Handsome showed outstanding light footed trot work with superb self carriage and a very clear rhythm. The walk was good, the canter groundcovering with good differences between the collection and the medium and extended canter. There was one problem with the first flying change, which the horse executed early at his own will. Also, Holger's seat was a bit strange as the rider seemed to be standing in the stirrups throughtout the ride and never really took place in the saddle. The judges' scores (7.9 for trot, 8.0 for walk and canter, 7.9 for submission and 8.0 for general impression) totalled 7.96 and put them in third position.