Uptown and Minderhoud Failed to Fulfil the Expectations 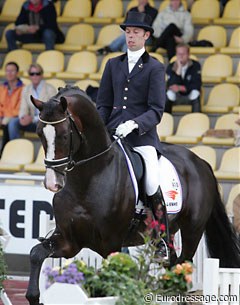 Dutch rider Hans Peter Minderhoud has a subscription to World Champion's titles in Verden (4 so far) and this year it was expected of him to go for it with Uptown, Holland's most successful KWPN breeding stallion at competitions.

Uptown (by Kennedy x Ubis) was the KWPN licensing champion, he won the Pavo Cup and the KWPN Stallion Competition Finals, there is nothing more to win in Holland for a young horse than that.

Owned by the Dutch breeder Toine Hoefs and his American friends Kathy Connelly and Al Guden, Uptown has three outstanding basic gaits. A very good walk, a stand-out trot and a super canter. It was not the quality of the gaits that kept him from a medal, but his stressed performances in the first and second round.

In the first round, Uptown showed a very flashy trot with a clawing front leg and a hind leg that fortunately tracks up. There could have been more bending in the body in the curved lines of the test. The horse is true eye candy to watch but he was tense, especially in the walk, where he showed two hooves overtrack but was nervous. In canter, he showed good engagement but the final transition to trot was hesitant. Minderhoud did a good job keeping the tension under control, despite the fact that Uptown sometimes came behind the vertical. The judges scored the gaits well (8.7 for trot, 8.6 for canter, 7.4 for walk) and were too generous on the submission mark (8.8). He got 8.5 for general impression which totalled 8.4 and a third place. 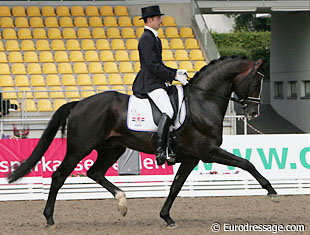 In the finals, Uptown was more nervous than in the first round. The trot tour was very inconsistent with the horse going behind the vertical regularly though Minderhoud kept a steady, light contact. There was a constant loss of rhythm in the trot and the horse did not move over the back, but the extensions were very nice. The walk showed good overtrack but could have been more free from the shoulder. The simple changes in canter lacked good walk and he broke into trot after the second extended canter.

The judges scored his final ride with 8.6 for walk, 8.8 for canter (too much!!), 8.2 for walk, 7.5 for submission and 8.6 for general impression. The overall score was 8.34 which placed them fifth. The judges praised Uptown for his "active, regulated trot" but added that he needed to "swing more through the back". Hopefully next time we get to see Uptown a bit more relaxed and harmonious and then a medal is guaranteed.