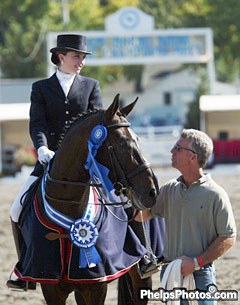 The 2006 FEI North American Young Riders' Championships will continue to honor its tradition as the premier competition for young riders, ages 16-21, in the three equestrian disciplines of eventing, dressage, and show jumping. In addition, the recently approved 2006 FEI North American Junior Championships for Dressage will take place, allowing junior dressage competitors the same thrills of competition in an FEI-team format as the young riders. This new event provides a second competitive opportunity for juniors in 2006, and follows the USEF Junior Dressage Team Championship which will be held in Pebble Beach, California, July 6-9, 2006. (For more information on this event, sponsored by Collecting Gaits Farm, the Dutta Corporation, and Performance Sales International visit www.usef.org.)

The two FEI dressage championships are comprised of dressage young riders competing at the FEI Young Rider Level (equivalent to Prix St. Georges), and juniors competing at the FEI Junior Level (equivalent to Fourth Level). Each USDF region will be given an opportunity to field a team of up to four juniors and a team of up to four young riders. Riders must qualify throughout a designated qualifying period according to criteria jointly approved by USDF and USEF, in order to be named to his/her respective regional teams. Only the top thirty-six young riders and top thirty-six juniors in the country are invited to compete for the United States in these FEI dressage championships.

In addition to dressage riders from the nine USDF regions, this event also includes riders from United States Equestrian Federation zones (for show jumping), and United States Eventing Association areas (for eventing), as well as riders from all provinces of Canada, Mexico, Central America, the Caribbean Islands, and Bermuda. Teams and individuals are invited to compete via each country's national equestrian federation. The broad range of competitors attending the championships produces an atmosphere much like our High Performance riders experience on the international scene.