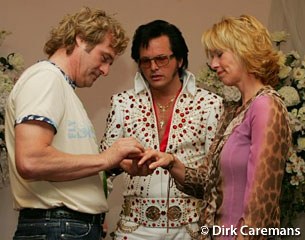 No, it's not a joke! Anky van Grunsven and Sjef Janssen got married in Las Vegas following Anky's victory at the 2005 World Cup Finals. "I'll only get married if there is an Elvis," Anky told Sjef

and because there are no limits to Las Vegas, Sunday afternoon Anky and Sjef walked down the isle in one of the many wedding chapels in Vegas and were joined in marriage by Elvis.

Anky and Sjef's song when walking down the isle was "I can't Help Falling in Love with You," sung by the Elvis impersonator/minister.

Source and Photo copyright of this unique news: Dirk Caremans