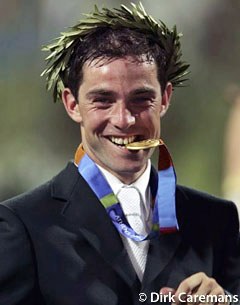 Has the equestrian world turned into a world ruled by maffia? The B-sample of Cian O'Connor's Waterford Crystal, the gold medal winning horse that tested positive to doping, has been robbed from the "Horseracing Forensic Laboratory" in Newmarket

, United Kingdom on October 21, 2004. Interpol, the British intelligence service, has been alerted of the theft and is investigating it.

The laboratory in Newmarket was assigned by the FEI to analyse 11 B-samples of horses that tested positive at shows, including the four doped horses at the Olympic Games (Waterford Crystal, Goldfever, Ringwood Cockatoo and Mary). The Newmarket lab, however, was unable to process that many samples in a short period of time and an FEI approved laboratory in Hong Kong was assigned to do it. Right before the B-samples were sent to Hong Kong, the B-sample of Waterford Crystal gas gone missing in the lab. The A-samples were analysed in Paris. The BBC reported that the Cambridge Constabulary confirmed "the courier company delivered the package, which was signed off. It was only later the sample was discovered to have been stolen."

So far sources do not mention what has happened to the other samples, whether they are stolen too, or already sent to Hong Kong. We are still waiting for a statement from the Irish Equestrian Federation on this matter. Furthermore, there is no official press release listed on the website of the FEI though national federations have been posted about the theft.

O'Connors reaction to the postive A-sample is the following: Mr. O'Connor has asked us to make this statement on his behalf:

"I am utterly devastated that the Sample 'A' taken from my horse at the Games has tested positive. That notion amounts to cheating, and I am not a cheat. I plan to have the 'B' sample tested as soon as possible and to proceed from there with the FEI. I believe that I won this medal fair and square and that the horse has not been given anything that would make him jump better.

"I wish to assure everyone that I have competed honestly and honorably both for myself and my country. It is particularly important to me that those who have supported me, including my family, my sponsors, the SJAI and the EFI, know and accept this. I am fully aware of the FEI rules, and I know that I must take responsibility for any medication administered to my horse. I am very professional, and take everything extremely seriously, both veterinary matters and the stable management at this level of competition. I absolutely believe that no performance-enhancing drugs were given to the horse."

"I must wait until the 'B' sample is analysed before I can make a detailed case to the authorities, and until this process is concluded, any further comment from me may be unhelpful to my case. In the light of the support given to me by the people of Ireland, it is my duty to inform them of my situation, and therefore I have postponed my Olympic engagements until this matter has been resolved.''

Mr. O'Connor has informed the EFI that on July 22, 2004, before the Olympic Games, his horse 'Waterford Crystal' had incurred a mild fetlock injury, and after assessment, his vet, Mr. James Sheeran MVB MRCVS, had advised hydrotherapy treatment, which involves confinement in an enclosed hydrotherapy unit. Mr. O'Connor was told by his vet that the sedative drug would disperse from the horse's system within ten to 14 days, and was not in any case a factor that would influence performance.

On November 1, 2004, the FEI Press (not online on their website) wrote: The FEI has been informed that on 21 October 2004 a portion of the B-Sample of the horse Waterford Crystal ridden by Cian O'Connor IRL in the 2004 Olympic Games was illegally taken in Cambridge UK. The sample was being shipped by a third-party courier service from the  Medication Control Programme Central Laboratory in Paris to the Horseracing Forensic Laboratory in Cambridgeshire. The police in Cambridge and Lausanne have been informed and are investigating the case. An internal FEI investigation is also being undertaken. The FEI is proceeding with the medication control case of Waterford Crystal in accordance with the FEI regulations.