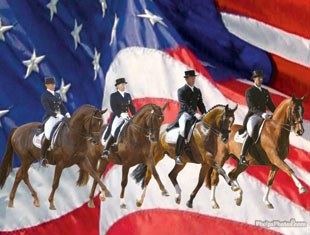 It felt somehow ‘right' to have the American Olympic Selection Trials in the pleasant California sun rather than the humid, mosquito-driven rains of the east coast.

For so many years, the traditions of Gladstone, home to the United States Equestrian Team, had dominated all decisions of the trials: when and where to have them. For years, the West Coast riders begged to have the trials on the west coast, at least once in a while..

Finally the USEF consented and all bad memories seem so far in the past.

American dressage has entered a new era, the ‘Balkenhol era', and the results were felt and seen everywhere. American riders are high-listed in the World Rankings. Going to the US Selection trials means, incredibly, that one is now seeing some of the top ranked riders in the world.

Coach Balkenhol says of his accomplishments, “Everyone now focuses in the same way, and have come to realize that the classic principles, the classic philosophy, is what makes the rider most successful.”

For sure, the Balkenhols are at the hub of everything…and as the trials proceed, and the scores go up, there is a lot of muttering about the COLOR of the medals that will be won.

Brentina and her rider, Debbie McDonald, were physically present at the trials but, as is now well-known—have been given a ‘bye' to save the mare for the huge effort expected at Athens.

In the early morning workout, the mare looked wonderful--- piaffe and passage stronger than ever, fully conditioned. The smile on McDonald's face just echoed what any onlooker could see.

Relevant and Lisa Wilcox are due to appear at CDI Hagen this coming weekend, and will in any case perform at Aachen and probably Lingen.

Brentina and Relevant are ranked in the top 5 of the world. But the Dutch and the Germans also have horses and riders ranked very high.

It was the performances of Robert Dover and FBW Kennedy that made people start muttering about medals.

Despite all the hoopla and hype, Kennedy and Dover produced consistently smooth and powerful performances. Dover has never ridden better, and the horse looked wonderful. All three gaits—including the walk—were pure and consistent. Indeed, consistency—and high performance—might be the watchwords for this pair. Every movement was not merely error-free, but thrythmic,balanced and powerful.

“O” judge Eric Lette helped create the judging revolution which has resulted in higher scores, which seem to keep getting higher. So long as one compares performance to performance and does not compare score to score, this is all right.

So—the performance of Kennedy was very good, and in today's lexicon, ‘very good'—no mistakes, fluent, rhythmic and balanced—received and deserved 7's,8's some 9s.

Everyone expected Guenter Seidel to score well at the trials, and he did so. The only surprise will be which of his two horses will he ride at Athens —the less-experienced but brilliant piaffe-machine, Aragon , or the more experienced better-known Nikolaus.

The real surprises of the trials were the runner-up horses. Steffen Peters chose to retire Grandeur at the trials, concentrating instead on Floriano—a horse that came into his barn for sale only some months ago!

But Floriano (full brother to Nicole Glaser Kappeler's Floriano Deux NRW) just keeps improving. Only in the hardest movements, such as piaffe, can one see that the horse can use still more conditioning and time.

Leslie Morse and Kingston placed right behind Peters and Floriano.

The first decision was not to send this combination. But the other riders, showing the solidarity and team spirit that Balkenhol has fostered, all said they would put money in the fund for sending this pair too!

In the end, the Selection Committee agreed to send Morse and her two horses to Europe .

With her younger stallion, Tip Top, Morse won the Intermediate One Championship (a title she has won three times with different horses).

Tip Top's PSG was very good. His Intermediate One was excellent. But his freestyle was just amazing! The crowd literally would not let her go, clapping and clapping during the honor round. The prize cooler on his rump provided just enough incentive that Morse was able to show off the stallion's piaffe and passage, as well as some lovely one-tempis, finally leaving the arena at an unplanned gallop.

The initial doubts about Kingston were based on somewhat inconsistent performances. AT the US Freestyle Championships some months ago (where Brentina and McDonald were chosen to represent the U.S.A. at World Cup), Kingston 's Grand Prix was stiff and sluggish. But the freestyle the next day brought the crowd to its feet, as horse and rider seemed totally invigorated.

At the Selection Trials, Morse decided to prove that Kingston could be consistent. Each day of the first weekend, she went for a smooth test, received scores hovering around 70-71%.

The second weekend, she went for more brilliance as well, and the scores crept upwards. In the end, in the final test, the freestyle, she placed 4 th and ranked 5th overall.

Later, Morse said she is planning to think about her regular tests as though they, too, are ridden to music, that it really seemed to help her in the transitions and flow of the tests.

As though to echo such a comparison, after the two stallions were finished, the announcer asked everyone to stay seated, and then asked for Klaus and Judith Balkenhol to come to the arena. A beautiful Lusitano filly danced in at the end of a leadline, and with some flourish, was presented to Judith Balkenhol.

Later, the Balkenhols said the filly would be turned out in pasture with their other yearling, and eventually, “we will see how she takes to the training.”

The meeting of classical and competitive had been accomplished!