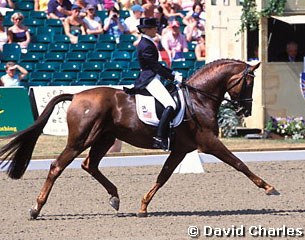 Immediately after the 2004 American Olympic Selection Trials in California, American based riders Debbie McDonald, Guenter Seidel, Steffen Peters and Leslie Morse, travelled to Europe to prepare for the Olympics

at team coach Klaus Balkenhol's place in Rosendahl, Germany. After the selection trials in California, three team members are absolutely certain of a place in the Olympic team: Debbie McDonald, Robert Dover and Guenter Seidel. Lisa Wilcox, Steffen Peters and Leslie Morse still have to challenge each other for that fourth place at three shows in Europe: Hagen, Aachen and Lingen.

First venue for the trio to clash is at the CDI Hagen at Hof Kasselmann in Hagen, Germany, July 1 - 4, 2004. Lisa Wilcox, Steffen Peters, Guenter Seidel and Leslie Morse are participating in the event, as well as other Olympic candidates such as German Hubertus Schmidt, and Colombian Dr. Cesar Parra. Wilcox will be competing Relevant after a long breeding season break.

Coach Balkenhol acknowledges that Relevant's breeding season has interfered with show condition and general show-worthiness but simply says that Hagen will work to "dust off cobwebs" and that "Relevant will be fully ready for Aachen ."

The CDI Hagen not only features an interesting Grand Prix tour, but is also the venue of the 2004 German Professional Dressage Riders Championships and the place for Europe's top Young Riders to compete in a CDI-YR.

The show in Hagen is called "Horses & Dreams" and is a total horse extravanganza featuring dressage and show jumping, as well as several sidekick acts. The trade fair will accentuate "Life Style and Wellness" with several exhibits and there is also a "Culture and Experiencepark" in which all facets of the equine care are being shown.