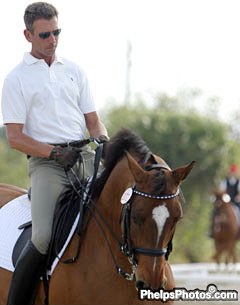 The Israelian Oded Shimoni has qualified as an individual rider for Israel to compete at the 2004 Olympic Games in Athens. Riding the 17-year-old Falco, Shimoni has become the first Israeli to qualify for an equestrian event at an Olympic Games.

Shimoni became the first Israeli ever to represent his country at the World Equestrian Games, first in Rome and then in Jerez, Spain. However, his WEG mount Glenstern (by Kaiserstern xx) who had been bought originally by Deborah and Oliver Cantrell of Saddlewood Farms, Brentwood, TN as a competition horse for Shimoni, developed some soundness problems. Glenstern did not recover in time to be ridden in the special qualifying tests.

Enter Falco, owned by Canadian Chris von Gartzen and assisted financially by a Tennessee family. Von Gartzen had been a student of Shimoni. When she heard that Glenstern may not be fit enough for the testing, she called Oded and offered him her 17-hand Dutch warmblood gelding.

The Olympic Qualifier, judged by Withages over two days, was tense. Shimoni had to beat a score of 67.4 percent by a Belarus rider that was the highest in the zone that includes Australia, New Zealand, Japan and several other countries. After the first of two Grand Prix tests, ridden on consecutive days, the pair fell short of getting sufficient points.

“Do not make those mistakes again and you may get enough marks,” Withages told him at the arena that had been provided for the occasion by five-time U.S. Olympian Robert Dover. On the do-or-die second day, Shimoni did better and was awarded a score of 67.923 percent, writing history by being the first Israeli to qualify for the Games in dressage.