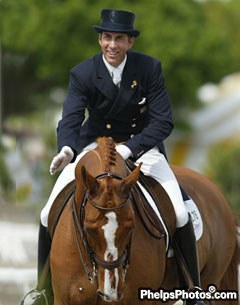 For the first time since he returned from his retirement with his two mounts owned by Jane Forbes Clark, Dover entered them both in the same class and produced a one-two finish – Dover placed first with FBW Kennedy, scoring 75.694% and placed second with his 2000 Sydney Olympic mount Rainier, earning 72.431%.   In addition, Dover won the Grand Prix Special with a score of 77.000% on FBW Kennedy and he won the Freestyle with a score of 77.917% on Rainier.

To qualify for the 2004 Olympic Selection Trials, rider/horse combinations must compete in a minimum of two USEF Qualifying Competitions, one of which must be a Concours de Dressage Internationale  (CDI).  There are 29 Qualifying Competitions held across the nation during the Olympic selection trial qualifying period, which began in the summer of 2003 and will finish June 4, 2004. They must complete the Grand Prix and Grand Prix Special at one of the qualifiers, and at the other, the Grand Prix and Grand Prix Freestyle. Riders that complete more than two qualifiers are allowed a drop score. However, the CDI may not be used as a drop score if it was the only CDI completed. 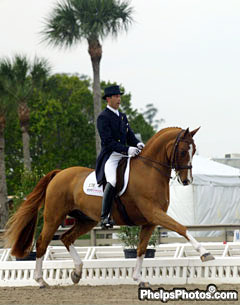 Riders have one more criterion to fulfill – they must be eligible for an FEI Certificate of Capability. To obtain Certificates, they must have scored at least 63% from an “O” Judge (FEI Official International Dressage Judge) of a nationality other than their own, in the Grand Prix at two CDI***/CDI-Ws or shows with more than a three-star rating, between January 1, 2003 and June 4, 2004.

Then, based on highest average scores in the designated qualifying competitions, the top 12 riders will be invited by the USEF to compete in the Dressage Selection Trials for the 2004 Athens Olympic Games. The Trials will be held at Oaks Blenheim in San Juan Capistrano, CA, over two weekends – June 11-13 and June 17-20. Three riders will be selected for the Olympic team at the Trials and the fourth and final rider/horse combination will be selected in Europe. A team of four will travel to Greece to represent the US in the XXVIII Summer Olympic Games, which are scheduled for August 13-29, 2004.