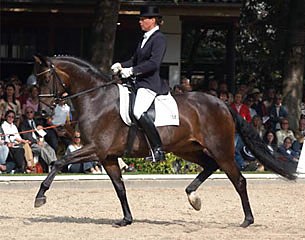 The 5-year old Dressage Horse division was a very entertaining and surprising one. The Hanoverian Dynamico (Don Primero x Weltmeyer) won the class and led from the start.

"That was an opening as it should be always," Hess said, "Dynamico is a superb type of dressage horse which is relaxed and dominant during its presentation." The judges awarded Dynamico and Dorothee Schneider a 9.0 for his finals' ride and immediately put a very high standard upon the 5-year olds' group. Dynamico, who is bred by Breeding Group Brauer from Meppen, Germany, and owned by Manfred Bräuer, was the surprise winner of the 5-year olds, as he only finished seventh in the qualifying round with 8.0.

Expected winner amongst the 5-year olds, but placing second overall was Baroncelli. First winning the qualifier with 9.1 over 64 fellow competitors., Susan Draper and her Hanoverian stallion entered the arena for the finals, "like a hero," Christoph Hess said. Baroncelli (by Bergamon x Matcho AA) was praised for being "a model athlete, who has been trained excellently by the elegant rider Susan Draper." A few minor errors in her ride cost her the overall victory. Placing third was Dirk Haese's Charming (by Champus x Lancer II) who was ridden by Ingrid Klimke. The stallion lost confidence in the finals although he still move with much elasticity. The Baden Wurttemberger stallion FBW French Kiss (Florestan x Donnerhall), also a title hopeful, had to settle for fourth place, just as Dorothee Schneider's Trakehner stallion Kaiserkult, by Van Deyk x Gajus.

Every couple of years, the Bundeschampionate gets to see a horse of such phenomenal quality that goose bumps, sighs, gasps, moans, tears and cheering encircle the arena during a rider. The last decade, Sandro Hit and Wahajama were horses that had such a special aura that you couldn't deny their exclusive, once-in-a-life time horse quality. At the 2003 Bundeschampionate, a third horse has entered the ring as if it were from another planet: Poetin. 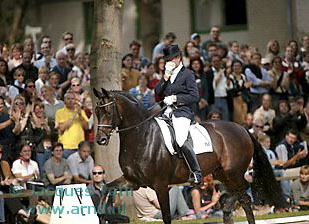 Ruling World Young Horse Champion in the 6-year old division, Poetin (by Sandro Hit x Brentano II) was the top favorite for the Bundeschampionate and both horse and rider Kathrin Meyer zu Strohen lived up to the expectations. No other 6-year old came even close to Poetin's performances in Warendorf.

Her finals' test was one of sheer brilliance. "A goose bump ride," Bundestrainer Holger Schmezer described Poetin's 9.5 earning test. Also commentator Christoph Hess could hardly control his enthusiasm: "I haven't seen such a trot tour in the past ten years. This is dressage in its perfection." Owned at the time by the Brandenburg Landgestut, Poetin won the qualifier with 9.3 and the finals with 9.5. The second place went to another Sandro Hit offspring, the Oldenburg bred Sandro ridden by Sandra Endres. The pair scored 9.0 in both the qualifier and the finals. Third placed was for Worldy, a Hanoverian stallion by Weltmeyer x Brentano II, owned by the American Elizabeth Lewis and ridden by Wolfhard Witte.

After the Bundeschampionate, Poetin was sold to P.S.I and will be auctioned in December.