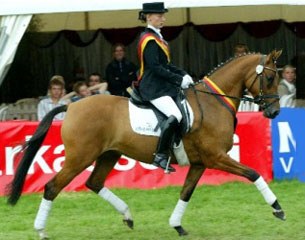 If there is one German pony stallion who is right now taking over the "foundation sire" title from Dressmann and Dornik B, it has to be FS Don't Worry.

In the 3-year old riding ponies mares and geldings' class, the bay mare Dreamgirl. Bred by Karl-Josef Saat and owned by Heiner Bertels from Spelle, Germany, HB Dreamgirl is a FS Don't Worry x Chantre B offspring competed by Jan Freund. Dreamgirl scored a 0.5 point difference in the fremdreiterstest, a finals in which two guest riders judge the winner of the class. Eva Möller awarded the mare a 9.0 and Iris Jonetat a 9.5. Freund beat herself, as she also rode FS Dark Shadow, a Rhinelander bred FS Don't Worry x Cath Night Safe to a same finals score of 8.50, but to an overall second place. 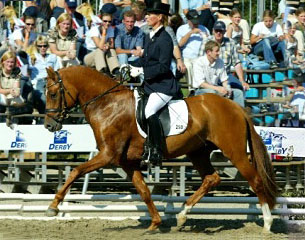 In the 3-year old pony stallion class, Katja Camp presented the best pony. Dinarion, a chestnut stallion by FS Don't Worry out of a Parino B dam, topped a field of 22 finalists. Dinarion did not participate in the award ceremony. In the fremdreitertest, Dinarion was a bit resistent under Iris Jonetat and turned completely lame under Eva Möller.

The veterinary was immediaitely there and diagnosed the pony. Despite his sudden lameness, Dinarion had already run an excellent competition and victory was his. Bred and owned by Claudia Beckers-Warlamow from Kempen, Germany, Dinarion achieved an overall score of 63,0. 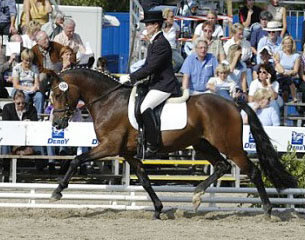 In the 4-year old pony stallion class, Munster auction rider Henrike Sommer-Böker excelled with the delightful Charm of Nibelungen. Bred and owned by Hans Bockholt of Steinfurt, Germany, Charm of Nibelungen (by Chantre B x Nansen) was praised by Bundeschampionate announcer Bruno Six for his canter: "this is a textbook canter, such scope and engagement!"

In the finals, Charm of Nibelungen received a 10 for canter and 9.5 for trot. There was room for improvement in the walk, which was not "cadence pure" (score 7.5). Sommer-Böker and Charm of Nibelungen beat last year's Bundeschampionate stallion champion Chardonnay, who was ridden by Kira Wulferding. Chardonnay is a licensed pony stallion by Constantin and is owned by Marta Kaufmann of Los Angeles, USA. 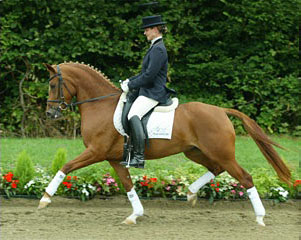 The audience, however, thought FS Dark Magic, the 2002 Bundeschampionate winner, woudl reclaim the title. FS Dark Magic, by FS Don't Worry, was presented by Jana Freund and labelled by some people as the "Poetin of the Pony World". 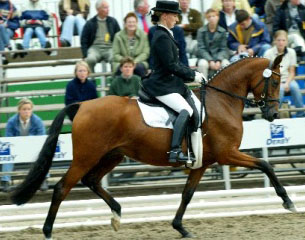 Scoring 9.0 for trot and overall impression, 9.5 for walk and 8.5 for canter and conformation, FS Dark Magic was about to win the class. However, in the fremdreitertest judged by Iris Jonetat and Svenja Irina Meyer, FS Dark Magic became difficult and the bit contact was unsteady. Meyer scored her 7.5 and Jonetat 8.5. Tessy and FS Dark Magic scored both an overall of 60.5, but in that case the fremdreitertest scores determine the winner, which was Tessy.