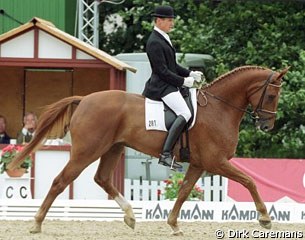 Silver medal winners in the 5-year-old division at the 2001 World Championships for young dressage horses were Holga Finken and Wanesco.

Considered to be the most promising young horse of the 5-year-olds at the Championships, Wanesco put down three sublime performances which gave away many glimpses of his talent and potential.

With 400 points in total, Wanesco was one point behind the first placed Rubels and Hans Peter Minderhout. Nonetheless, did Wanesco not lack in quality to the Oldenburg champion. Under Holga Finken's professional horsemanship, Wanesco was fourth in the first round with 8.4. points, was second in the second round and dominated the finals with 9.0 points.

Owned by Fritz Böhm from Worpswede and bred by Kurt Pelk from WIndsbach, Germany, Wanesco is by Weltmeyer out of a Werther dam and is registered with the Bavarian Verband.