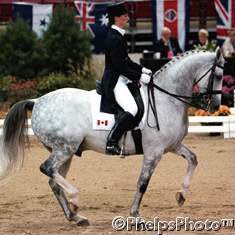 Gina Smith of Brockville, ON, was the winner of the grand prix in the Swarovski Canadian League Dressage World Cup Final in the first of two nights of dressage competition at the Royal Horse Show in Toronto, ON. The 1988 Olympic bronze medallist earned a score of 63.61% from the five-member panel of international judges in the sport often described as ‘equestrian ballet’. Having completed the World Cup qualifying season at the top of the leader board, Smith, 41, was the odd’s on favourite coming into today’s grand prix event.

"I was expecting him to be more nervous, the way he was when we competed here in the Final two years ago, but he was very relaxed," Smith said of her mount, Fledermaus, a 12-year-old Dutch Warmblood owned by FranklandsFarm. "I’m really looking forward to tomorrow’s Freestyle. We have three good horses, so it should be a great competition for the audience."

Tomorrow evening’s sold-out event features the the Grand Prix Freestyle which sees riders choreograph required movements to the music of their choice. The winner of the Swarovski Canadian League World Cup Final will be named Canada’s representative for the 2000 World Cup Final, held March 23-26 in ‘s-Hertogenbosch, NED. None of the three riders have ever before represented Canada at a World Cup Final.